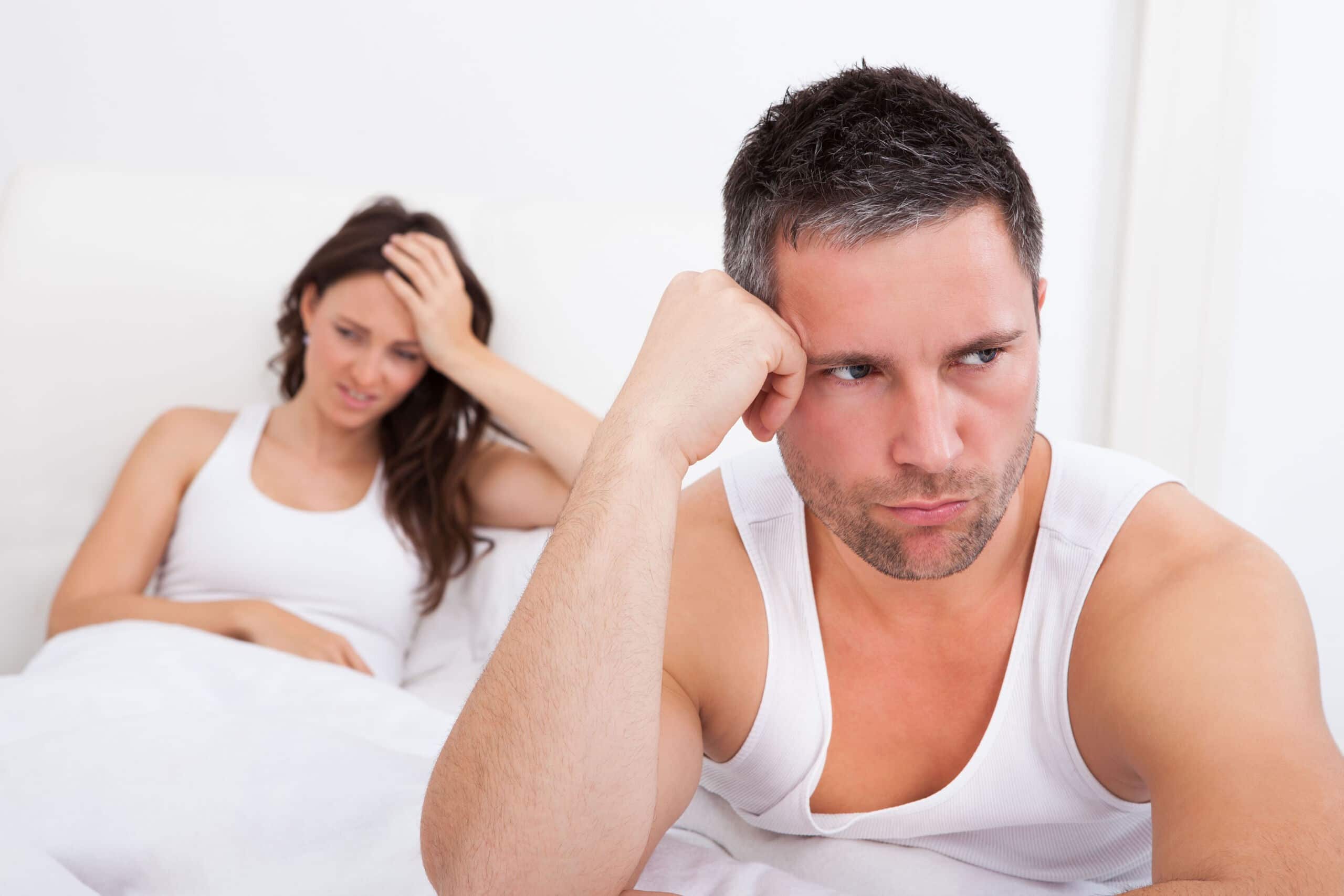 Are you stuck in a Sexless Marriage? Are you wondering what’s the point and questioning whether your only choice for passion and intimacy is to find a different woman?

A while back I heard from a woman who was absolutely stunned by her husband’s “cluelessness”.  As you might guess, building sexual intimacy is extremely difficult with a “stunned woman”.  Good news!  YOU have a tremendous personal ability to prevent “Stunned Woman Syndrome” and, in fact, you can help create “Sensual Woman Syndrome” if you so choose.  This article will cover just ONE of the major causes of wives becoming less sexually attracted to their husbands.  This is when his sex drive sabotages his sex appeal.

But first, here is the short story.

Maggie came home from her 3rd 10-hour workday to find her husband, Joe, sitting on the couch watching TV with the dog.  No problem so far.  Joe had a hard day too and is just relaxing.  As Maggie goes into her normal 10 minutes of venting the recap of her day, she talks about how bad her back has been hurting.  The frequent lifting at her job has caused a lot of spasms and she’s been popping ibuprofen and going through a lot of ice packs.  Oh, and she’s giving this recap as she walks back and forth to the garage to unload groceries.

When she’s done talking, she asks Joe how his day was.  His response?   “It was ok.  So, I guess sex is out of the question?”  I know.  Most of us could have identified that as a bad call.  To make it even better, he watched her unload the groceries by herself as she was describing the pain in her back.  Joe single-handedly created her “Stunned Woman Syndrome”.

After talking to Joe, it was clear he’s not stupid.  He’s not abusive.  He’s not normally a clueless twit.  But he DID screw up badly.  He and Maggie have been enjoying a fairly satisfying, but increasingly, “routine” sex life for 5 years.  Over the last 6 months the sex has become more and more infrequent and it has been bugging Joe.

What happened that night can happen to ANY man.  That is, Joe allowed his SEX DRIVE to totally sabotage his SEX APPEAL.  The effects of this lingered for Maggie for quite some time and he couldn’t blame her.  This is one of the MANY reasons men can gradually become UNATTRACTIVE to their wives.

Some men will totally forget what they were like when their attraction factor was very high with their wife.  They incorrectly believe that the difference was in their wife.  She was somehow more sexually eager, more open to him, more comfortable with initiating sex on her own.  The truth is that these men have become less and less attractive to their wives.  The reason their wives acted differently toward them before is because their husbands were different.  They were more relaxed, more confident, more playful, more respectful, more thoughtful, more trustworthy and LESS apologetic for being sexual men.

In this case, Joe admitted to having fallen into the trap of sexual neediness – an incredibly unattractive place to be.  The first month that he sensed less interest from Maggie, he started pushing her harder.  His sex drive didn’t change and he didn’t want hers to either.  Joe would start pressuring Maggie with hints of his horniness and he would give her poorly timed sexual touches.  She would reject those advances and Joe would get resentful.  He then resorted to initiating sex every time they went to bed hoping that persistence would pay off.  This just irritated Maggie further because she felt Joe only wanted to be with her for sex.  So she continued to reject him.

Since that method didn’t work, Joe became more frustrated and tried to appeal to her sense of pity.  He would play “puppy dog” with Maggie and practically plead for her to give him sex.  This was so unappealing to Maggie she actually would give in and have “Obligation Sex” just to get him to stop whining.  She was never emotionally present during these times and had a “just get it over with” attitude.  Joe didn’t notice or care which made him even more unattractive.

So the story goes with so many men who do not understand what is happening.  Little by little they have allowed their sex drive to undermine all the things that USED TO make them so attractive to their wives.  If you add in the common misconception that sex should always be easy in a marriage, these men start ramping up pressure and expectations for sex.  And they do this while they are becoming more and more unattractive.  They fall into an ugly pattern of:

Always making sexually suggestive comments in social situations
Publicly declaring sexual dissatisfaction with their wife when she is present and when she is not
Continually trying to do things for their wife with the expectation of “earning” sex
Begging for sex and pouting when they are rejected
Initiating sex at inappropriate times
Acting tentative, insecure, and afraid to approach their wife
Having angry outbursts and tantrums each time they are rejected
This kind of man has reached the pinnacle of “unattractiveness”.  The mental and emotional state of this man also becomes apparent to other people.  His anger, frustration, and lack of confidence can bleed over into his parenting and his work relationships.

The only way out of this downward spiral is for him to become the man he used to be for his wife.  Remember him?

more relaxed
more confident
more playful
more respectful
more thoughtful
more trustworthy
LESS apologetic for being sexual men.
This is the SEX APPEAL he can recapture.  It’s THIS GUY who his wife could not get enough of in the past.  This guy was so naturally sexy he didn’t even know it.

Joe’s plan of action became clear.  He first had to understand and believe that he had the power to throttle back his sex drive so his sex appeal could breathe again!  Joe decided that he had gotten to a place of expectation and entitlement in the sex department.  He wanted to change that about himself because he didn’t like who he had become inside AND outside his marriage relationship.  He identified key areas that he had been ignoring and that Maggie had been missing.  The most important ones for Maggie were:

Building more trust that Joe loved her just for HER
Being more thoughtful about helping and listening to her
She wanted the “Confident Joe” back and no more of the “Needy Joe”
Maggie admitted that she felt respect and sexual attraction for Joe when he was masculine, playful, and thoughtful.  When he acted like a confident man who loved her but didn’t NEED her, his overt sexuality toward her was extremely attractive.  When Joe did things “just because” and without expectation, Maggie felt safe and would comfortably initiate sex.

Joe discovered the key to it all.  All he had to do was worry about changing himself – not Maggie.  If he could simply become the man he really wanted to be – the one SHE needs him to be, the rest took care of itself.  The “Sensual Woman Syndrome” became a natural result of that!

Join our group coaching and get to talk to other men who have been through the pain you’re experiencing right now and come out the other side, more confident, more deliberate and with new skills that enable them to create a totally different future.

Or fill in our inquiry form for a completely free, life changing conversation with me where we go deep into what’s really causing the disconnection in your relationship and what you can do immediately to change what happens next.